as if I had missed the smell of hot garbage...

resources, events, and opportunities for July 24 to August 1

wow! well, the weather since I’ve been in NYC has been garbage up until today (my triathlon was canceled!!!), and I’ve been totally overwhelmed with seeing friends and catching up on the practical side of things (just picked up my new laptop!!!!!!), but I did manage to make it out for Tech Learning Collective’s Gone Phishing workshop last Sunday.

after checking them out, I highly recommend!! I’ve gone to a lot of meetups, including a few cybersecurity workshops, and what they are doing is really top of the line. the workshop was a good middle ground of welcoming for beginners, but still engaging for more experienced people (I learned so much!). it was well-paced and had a tight, manageable scope, but I also walked a way with a ton of links of additional resources to explore on my own time.

so if you’re in the NYC area and have the chance, definitely check out their calendar! they have a new event coming up in August that looks similarly great:

This workshop is designed for anyone who ever wanted to toy with HTML once or twice, whether it was in the 90’s or just last week. Based on a portion of the Tech Learning Collective’s WEB101 course, it is a remarkably thorough treatment of some of the Web’s most powerful and most-often overlooked parts. Covering the structure of HTML and extending to the richness of semantic data formats like Microdata and RDFa, learn how to write in the Web’s native language so that both humans (like your friends and comrades) and machines (like Google!) can find, use, and most importantly understand what you’re saying.

this introduction to HTML and CSS will take place on August 13 at 7pm at POWRPLNT, and tickets are a suggested donation of $25 (no one will be turned away for lack of funds). you can learn more here!

KLAXON KLAXON 100 DAYS TO HALLOWEEN! Adafruit have been working on an update on their Hallowing, a skull-shaped development board with an updated display and chip and some added neopixels for all your spooky needs. you can check ou tthis video now, and it looks like it’ll be available for purchase soon. if you haven’t browsed their site recently, there’s tons of new stuff. now I need to see if I can get some stuff shipped to me before I leave the US next week lol.

if you already have a grounding in node and Visual Studio, this tutorial digs in to using BabylonJS and CannonJS for building a web VR game. it’s also worth heading over to the BabylonJS community page to see what other people have been making!

on that note, if you need a grounding in Visual Studio, here’s a rundown of some of the editor’s features by Nina Zakharenko. it looks especially useful for remote collaboration, if you’re thinking about working on a project with faraway friends.

is an open-source dashboard in your future? Sm0ke has been pulling together some good lists for different frameworks, including React, Vue, and Bootstrap CSS.

and here’s an overview to designing API methods in JavaScript. have you been working on something that you want to open up for other developers? here’s a place to start.

NEoN Digital Arts Festival in Dundee, Scotland is hosting an open call for augmented reality works on the theme of “REACT,” exploring how artists use digital systems to effect change within our social and political realities. the deadline for proposals is July 31, so you have a nice chunk of time to get this one sent off. projects will be hosted for the festival this November, and artists will receive a fee of £2000 for the production/licensing of the work. you can learn more here.

applications are open for The Strange’s fall “Decelerator,” a retreat/residency hybrid for those seeking a chance to slow down and focus on an ambitious creative undertaking from a beautiful location in the mountains. this fall's program will specifically be made available to practitioners whose work extends beyond themselves by generating critical opportunities and support for others. applications are due by August 1! you can learn more here.

hey! did you know that Tech Learning Collective has rolling admissions? did you miss their deadline for the July NET101 course? their courses and events look great and are worth checking out - if you’ve missed the latest deadline for one of their courses, pre-enroll for the next session on their site!

tonight! July 24! Supplyframe DesignLab! Pasadena, CA, USA: Supplyframe DesignLab and Modular are hosting a night of modular synth magic! performances, workshops, giveaways and free food and drink! the lineup of performers looks great- check it out! rsvp for this FREE EVENT on Eventbrite.

Sept 16-21! Berlin, Germany: Citizens of Evidence: Independent Investigations for Changeis a conference of the Disruption Network Lab this September in Berlin. the conference itself is the 20-21, in conjunction with a workshop presented by School of Machines, Making & Make-Believe on using technology to investigate injustice. this looks really good, and I’m secretly trying to come up with excuses to attend. you can learn more here.

as always, submit to the open artist call if you have anything in the works that you are excited about! I swear I’m actually going to read through them and start pinging people (lol). and if you have an event or opportunity to promote (anywhere), please send me all the details. the next newsletter will cover the week of August 2 to August 8, but I’m happy to promote events further in the future as well and keep them on the calendar.

friday open thread: what tools should I explore?

All hail the Water type! 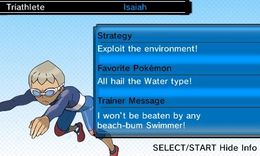