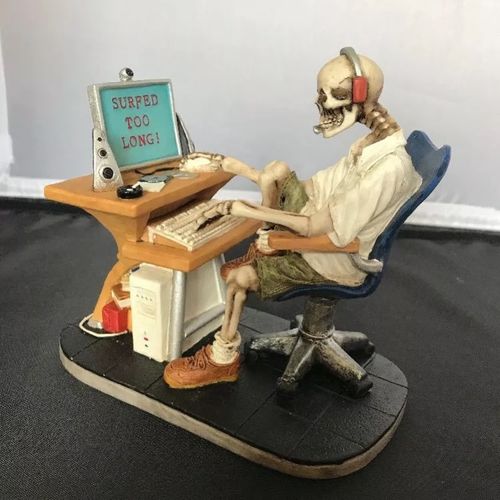 resources, opportunities, and events just in time for spoopin'

ok so I don’t really like doing costumes, or carving pumpkins, or even going to Halloween parties that much anymore, but I do love a good scare, and I often think about horror as a genre that can inspire a lot of conversations about designing and manipulating experiences. of course, you can always take the easy way out with a jump scare or lots of gore, but my favorite horror films and games tend to use other techniques to create an experience for the audience.

one of my all-time most memorable horror experiences is the few weeks in 2006 where I was obsessed with a copy of Rule of Rose that my roommate’s boyfriend left in our dorm room because he thought it was “too weird.” I had never gotten into other survival horror games like Silent Hill, but I found myself playing Rule of Rose every spare moment I had between classes. what was so compelling about it? the narrative is certainly unique and strange, but one of my favorite things was the actual mechanics of the experience. your character has real weaknesses that affect gameplay - for example, too much running can trigger an asthma attack that makes it much harder to escape enemies. at the time, it felt so different from other games where you’re essentially immortal and all-powerful.

I still find the concepts behind the game mechanics super inspiring and immersive. the game has since fallen into obscurity, due to scandals around its release and content. maybe it was just ahead of its time? but it’s funny how certain works can stick with you and inform your own work, even if they aren’t a true masterpiece by any means. if you’re curious about Rule of Rose, I recommend this video, but with a CONTENT WARNING for themes like abuse, bullying, self-harm, and more (the video begins with a full list).

first and foremost, what are u doing if ur not starting ur Halloween over at Adafruit? they have special sections on their blog and their shop to inspire your next project and get you the supplies you need. maybe you need a Piezo buzzer for trick? or a xenomorph candy bucket?

the real star is their Adafruit MONSTER M4SK, a DIY electronic eyes mask that can be used to add animated eyeballs to a costume, and a whole lot more. you can learn more about it here. it’s finally back in stock so go grab yours ASAP!

do you want to spice up your website with some seasonal icons? Noun Project has pulled together a list of Halloween and Autumn icon collections here.

Speckboy also has shared 10 free vector patterns and free vintage Halloween stamps to spoop up whatever you’re working on.

have you ever wondered what goes on behind the scenes at a haunted house? well the one featured in this article from Popular Mechanics runs on Arduinos and a lot of chainsaws, apparently:

Jack Berggren buys chainsaws 10 at a time. “When you run them wide open with no load, they don’t last very long,” he says.

ok who is old enough to remember those jump scare flash games??? this project from BootUp PD shows you how to use Scratch to make your own, complete with a pretty thorough lesson plan for teachers.

Wednesday, October 23! Babycastles! NYC, NY USA: for October’s game of the month, the Babycastles crew will be playing Devotion, a first-person horror game inspired by East Asian folklore. the story, set in a Taiwanese apartment complex in the 80s, follows a failing screenwriter and his family as they become increasingly involved with a cult. the game was released to critical acclaim, but has since been removed from the Steam Store globally due to backlash from mainland Chinese players, with additional ramifications for the studio and its publisher. topical! if you dug deep on the Rule of Rose controversy above, this evening of gameplay and discussion might be right up your alley! you can learn more here.

Friday, October 25! Wonderville! Brooklyn, NY USA: cower in the presence of spooky live coded music, cursed visuals, and the software of the damned at Livecode.NYC’s Halloween show! Wonderville was one of my fav new stops on my last visit to NYC, and this event looks like tons of spooktacular fun. plus tickets are only $10! you can learn more and get tickets here.

it’s the 3rd annual #HackAPumpkin challenge! no rules, just create something pumpkin related with all your creative powers and share it on social media for a chance at a prize from Digi-Key Electronics.

all entries must be posted by midnight EST on October 31st so get spooky!

if you have anything in the works that you are excited about (an event, a workshop, a new project), please send me all the details. the next newsletter will cover the week of October 21 - 27, but I’m happy to promote events further in the future as well and keep them on the calendar.

The link has been copied!